Exo-deviation is an outward deviation which can be divided into exophoria and exotropia. Exodeviation are quite common, and they are not necessarily. A small intermittent exotropia is normal in most newborns, as 70 % of normal newborns have a transient exodeviation that resolves by 2 to 4 months of age.  Another type of exo deviation that is considered normal is a small exophoria (<10pd).

Most normal adults have a small exophoria when fully dissociated. Exo deviations are controlled with our innate strong fusional convergence (measuring about 30pd). Facial asymmetry associated with exodeviations has been described. The deviated eye is invariably on the side with a slanted posterior orbit and is usually accompanied by antimongoloid lid fissures. There may be history of birth trauma, less facial development on the affected side, or anisometropic amblyopia resulting from unequal sensory input.

For summary, most common of exo deviations been found is the intermittent exotropia (90% of all exo deviation cases).

Exophoria is heterophoria in which there is deviation of the visual axis of an eye away from that of the other eye in the absence of visual fusional stimuli. When both eyes are open (when binocular vision is present), each eye points accurately at the target. Upon covering one eye while the eyes are fixating a target, the covered eye turns outwards. It is a muscle imbalance of the eyes, so that the eyes have a tendency to “pull out” or diverge. Usually, exophoria is associated with either a divergence excess of convergence insufficiency.

With normal amounts of exophoria that still able to compensate by the fusional vergence range, visual system can still keep the eyes aligned without excessive eyestrain or fatigue. However, with larger amounts of exophoria, the effort needed to keep the eyes aligned may be great enough to cause symptoms of eyestrain. Usually, these symptoms are most noticeable with near visual tasks. The symptoms include sore or tired eyes, headaches, lack of concentration, occasional double vision, and avoidance. Basically, exophoria is further classified into 3 main category which is basic exophoria, convergence insufficiency and divergence excess. 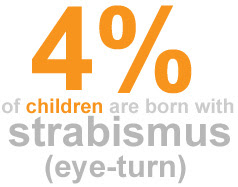 Exotropia is a manifest deviation that is not compensated by fusional convergence which is unlike the exophoria. It is a deviation of the lines of sight between the two eyes in which the non fixating eye is pointed outward. The deviation may occur while fixating (looking at) distance objects, near objects or both.

The onset of exotropia begins at the age of 7 or 8 which is later than esotropia. Some exotropia occurs late probably because it starts as exophoria. The deterioration from exophoria to exotropia in older people may be related to the decrease of tonic convergence, gradual lessening of accommodation and the increased in divergence of orbit with age. Transient exotropia commonly occurs during the first few months of life. Approximately 66% of the neurologically normal newborns have exotropia during the motility examination. Number of the exotropia cases is reducing as the patients’ age increase. Most of the transient exotropia disappear at by the age of 6 months. For the classification of the exotropia, it can be divided into main 3 categories which are primary, secondary and consecutive.

In most cases, the first signs of exotropia appear during childhood. Typically, exotropia begins intermittently, occurring while the child is staring into space or daydreaming. The deviation may become more noticeable while the child is staring at something from a distance. Most children do not know they have vision problems. Sadly, they think problems such as double vision or trouble seeing distances (myopia or nearsightedness) are normal and do not express their inability to see clearly. Because of this, it is important to watch children for symptoms of all eye conditions, including exotropia. Symptoms of exotropia include: 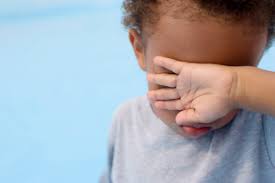 As a parent, it is important to watch for a change in frequency of symptoms. Intermittent exotropia is detectable after six months of age, and is considered a progressive disorder that can lead to constant exotropia if left untreated.

No one is quite sure what causes exotropia, but this condition is believed to be connected to the six muscles that control eye movement. Normally, these six muscles work together, sending signals to the brain and directing eye movements so that both eyes can focus on the same object. But when there is a disruption and the muscles do not work together, some form of strabismus, including exotropia, may occur. Other causes may involve the nerves that transmit information from the brain to the muscles, or the part of the brain that directs eye movements. Eye injuries, head trauma, and other general health conditions can also cause exotropia.

In mild cases of exotropia, eyeglasses and eye exercises are usually the most common treatment methods. Eyeglasses are usually given to those with nearsightedness. Eye exercises benefit those with convergence insufficiency more than other types of exotropia. Theorists believe eye exercises are best taught in two parts: recognize the problem, than learn to stop or control the problem. Most people with intermittent exotropia (the most common form) can learn to recognize the problem, but cannot learn to make it stop. 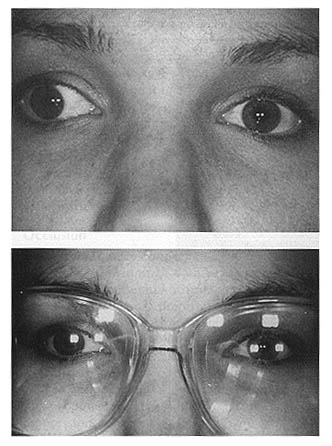 (After been prescribed with optimum prescriptive lenses, some exotropia eye can be aligned to be normal position.)

In moderate to severe cases in children, an eye patch may be recommended. Typically, eye patches are only used for children who have exotropia and amblyopia (decreased vision in one eye). If the methods above fail or if a child’s vision can be saved, eye muscle surgery can be performed.

Most importantly, early detection of exotropia (eye turned outward) will prevent secondary damage to the eye such as developing of lazy eye. Early treatment will further increase the chances of regaining back normal vision.