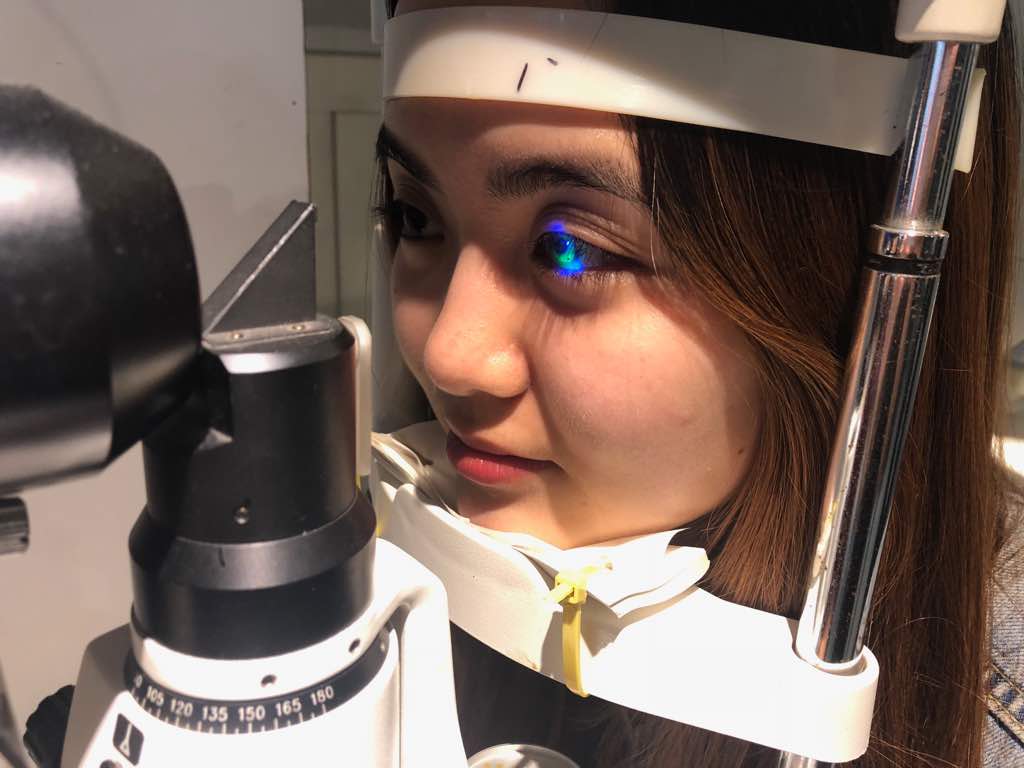 Corneal ulcer is refered as the erosion or inflammatry open sore condition that occur to the cornea layer.

Generally, cornea are subdivided into five layers which are the epithelium, Bowman, stroma, Descemet and endothelium layer. Only injuries that occur on the epithlium (superficially) will not left a scar or mark as the epithelium layer have the capability to regenerate and heal by itself (within 24 hours to few days). Any injurius that penetrated until the stroma layer will permanently live a scar that may affect the vision if the scar location is within the pathway of the visual axis. Normally, ulceration that occur will reached the stroma layer and its usually associated to eye infection such as bacteria infection, viral infection, fungal infection and etc. Corneal ulcer will also spread quickly (from few minutes to few hours) and increase in size of it as well during this short period of time. 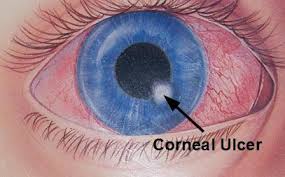 Typically, contact lens wearer will be in a higher risk of having eye infection and corneal ulcer due to the direct cotact of the contact lens on the cornea surface. Recently the increased use of soft contact lenses in recent years has led to a dramatic rise in the occurrence of corneal ulcer, particularly due to Pseudomonas aeruginosa. Contact lens wearers who fail to remove their lenses or fail to follow specific instruction in using their contact lenses will be in even higher risk. The risk factors associated with increased risk of contact lens related corneal ulcers are overnight wear, long duration of continuous wear, lower socio-economic classes, smoking, dry eye and poor hygiene. For some rare cases, such as for the contact lens wearer who swimming with contact lens and fail to remove them after the swimming will significantly increase their risk for a corneal ulcer (bacteria infection such as Acanthamoeba keratitis). Common bacterial isolates cultured from patients with keratitis (cornea inflammation due to the ulceration) include Pseudomonas aeruginosa, coagulase-negative staphylococci, Staphylococcus aureus, Streptococcus pneumoniae, and Enterobacteriaceae (including Klebsiella, Enterobacter, Serratia, and Proteus). As for Fungi (Fusarium) and amoeba (Acanthamoeba) have been found in a small number of patients but frequently present with more severe symptoms.

Besides contact lens, some minor traumatic accident that occur toward the cornea and caused a small cut or opening at the cornea epithelium layer will result a ulceration as well. This is due to the reason that any bacteria, viral, fungi or parasite will be able to enter the cornea layer (causing ulceration) through the entry (wound at the cornea surface).

In corneal ulceration, the main signs and symptoms are severe pain of the eye making most of the patient having difficulty to open their eye as well. This might follow up with the eye redness and itchiness as well as the surrounding of the conjuctiva. This is because cornea are very sensitive due to high innervation by nerve system. Any ulceration that occur will expose these nerves thus elicit the severe pain burning sensation on the eye. Yet, watery eye with tearing and discharge will be seen when corneal ulceration occur. Usually, a lot of patient with corneal ulceration will complaint of photophobia (increased light sensitivity) with blurry vision as well due to the edema state of the cornea.

For optometrist and ophthalmologist to diagnose a cornea ulceration include the sign of white spot on the cornea.

Further slit lamp examination with fluorescein may review the wound deepness or severity as well as the ulceration involved area. For some severe cases, cell and flare or even keratic precipitate maybe observe if the corneal ulceration caused a further inflammatory toward the anterior chamber area.

The primary eye care in treating corneal ulceration will depend on the risk factor that causing the ulceration. Of course, for the corneal ulcer that secondary from contact lens complication, immediate stop of wearing contact lens will be required and all the current using contact lens or solution will need to be disposed as well. Any suspected sudden red eye that occur within 24 hours should be consult with optometrist or ophthalmologist as soon as possible to prevent further damage toward the cornea of the eye.

For most cases with infection (bacteria, fungi, viral or other parasites), topical antibiotic with broad spectrum such as chroamphenicol will be prescribed by ophthalmologist to help control the infection. Depending on the doctor and the patient eye condition, initial cultures to determine the type of infection may or may not be done to identify the type of infection that causing the corneal ulceration. But once the exact cause is known, drops that treat bacteria,  viruses, or a fungus specifically can be prescribed. For addition, corticosteroid eye drops may be used to reduce swelling and inflammation in certain conditions.

If the ulceration is in the central cornea, the condition usually takes longer to be heal, and vision may be reduced permanently due to scarring. Unfortunately, permanent damage and vision loss may occur even if the condition is identified and treated early. For such cases, a corneal transplant maybe the only option left to help regain a better vision back.

To have more information, please feel free to consult with our best optometrists in KL.

GET THE RIGHT OPTOMETRIST
BOOK AN APPOINTMENT WITH US TODAY